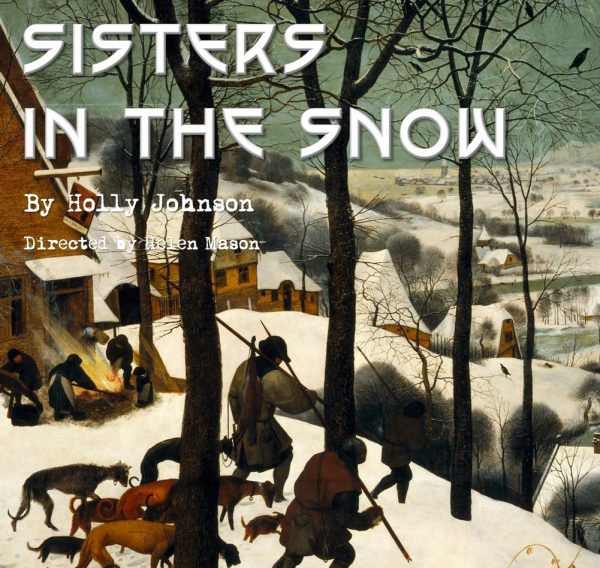 Sisters in the Snow – Audioplay

By Holly Johnson, directed by Helen Mason, audio engineering by David Harvey, by arrangement with the author.

Online at any time

Our “live” production could not go ahead due to COVID-19. However, we recorded an illustrated audio version in lockdown which is available via YouTube now.

“What are you hunting for Abby?”

Sisters in the Snow is a magical tale of sibling rivalry, time travel, love and the power of art.

Written by American playwright Holly Johnson, the play is set in Vienna and inspired by Bruegel’s famous painting Hunters in the Snow

“Art is long, life is short”

Join us amidst the Flemish lowlands where cultures connect, and the usual rules of science and time don’t apply.

Holly Johnson is a freelance writer, artist and traveller who has written primarily about the arts for daily newspapers, and travelled predominantly in Europe and England, where she attended University of Bristol on a journalism fellowship.

The play was first performed in 2017 at the Fertile Ground Festival of New Work, a 11-day arts festival held every January in Portland, Oregon USA. This version of the play resulted from Holly visiting Streatham in June 2019 as STC Writer in Residence when she met with the Director and members of STC to workshop the script ready for its UK and European premiere.

Helen Mason is a founder member of STC and currently arranges our monthly events programme. She has been involved in community arts and theatre in South London for over 30 years as an actor, set designer and director. Her director credits include Run For Your Wife, Breaking the Code and Playing with Sugar for STC, The Lady in the Van and The Clink at BAC, and Teechers and Lucky Sods for Hallmark Players.

David Harvey is the founding Chairman of STC and has recorded other audioplays for Network Theatre (The Adventure of the Blue Carbuncle and Necropolis Now), as well as doing the “techy stuff” for STC productions.

Online at any time FREE